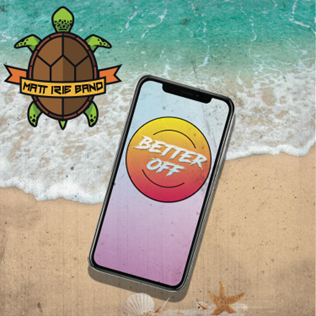 Matt Irie Band is back with their brand new single, “Better Off,” available for streaming on Friday, June 10. This follows up their last song, “Run To,” and carries a similar reminder that sometimes, you have to just face the music. I think we’ve all had an opportunity to reassess the world around us lately, and “Better Off” captures that moment of clarity.

MIB offers the following to describe the track:

“Better Off” is a song that lets the listener know that it’s okay to break away from something or someone that’s not necessarily bringing you the peace you need in your life…Here’s a reminder that you are the only one who can decide to leave unhealthy relationships behind, cause truthfully, you’re “Better Off.”

Let’s face it, the world is harsh. Sometimes, we attach ourselves to something or someone and convince ourselves that it’s perfectly fine when deep down, we know it’s not. The lyrics from “Better Off” may strike a nerve – and they should. But, in typical Matt Irie Band fashion, the song pulls in the late 90s alt rock influence and has you singing along instantly. The vocals flow with a catchy chorus and styled verses. Drum beats support the constant tapping along and are coupled perfectly with the summer-ready riffs that define the MIB sound.

Music journalist Jenny Flanigan describes the song as giving “311 vibes with the funky, feel-good beat and beach vibes it has. It has a dance-worthy beat throughout the entire song and is a song that can easily get stuck in your head. The guitar riff after the first chorus really draws you in. It has a Reggae infused with rock sound that is unique and quite catchy. The song is upbeat with a positive message to remember it’s okay to leave a toxic relationship and remember you’re better off without it.”

Leading up to this release, the Matt Irie Band also just announced their appearance at the License 2 Chill Festival in October alongside the Dirty Heads, The Movement, and many more. For more information, go to www.License2Chill.live.

“Better Off” was recorded with Benjy Johnson at the Earthtones Recording Studio in Greensboro. This follows the last singles “Run To” and “Coastal” dropped over the last year. “Better Off” was mixed by David Dominguez and mastered by Maor Appelbaum Mastering. Distribution courtesy of Ingrooves Music Group/The Label Group.

The Matt Irie Band started as a one-man show in North Carolina in 2006 with vocalist Matt Irie rocking with a DJ at local hip hop shows. Multiple lineup changes over the years brought together a fusion of genres to form the five-piece group they are today. Joined by Larry Holcomb and Joe Watkins on guitars, Will Barkley on drums, and Michael Dorsett on bass and keys, Matt Irie leads what is described as “island infused-Funky Blues.” They draw on their diverse backgrounds, bringing together influences from bands like Beastie Boys, Dr. John, Howlin Wolf, and Incubus, and finding themselves sharing the stage with the likes of Pepper, Rev Run, Morning 40 Federation, Ludacris, Jelly Roll, The Movement, CKY, Bubba Sparxxx, The Hu, Falling in Reverse, Kellie Pickler, Tim Reynolds, Kottonmouth Kings, The Green, Stick Figure, Fortunate Youth, and Motionless in White.

The past few years have taken the band to the next level, enjoying the spotlight on multiple festivals like the Blue Ridge Rock Festival and the Port City Reggae Festival. The Matt Irie Band has formed a one-of-a-kind cocktail blend, packing a unique style and energetic sound to win crowds over at venues all over the Southeast, catching a strong buzz around the entire US, and raising glasses as far as Australia, France, and Japan. “Better Off” is the third single from Matt Irie Band, following up “Run To” and “Coastal.” Be sure to follow them on the socials as they get ready to drop more music in the coming months! Their music can be found on all major streaming platforms.

We are your one stop spot for all things that ROCK. We aim to push the limits of the ultimate music experience. Welcome to the Threshold. It's time to cross over.

© The Threshold Media. All Rights Reserved.